Mihai Stoica, the general manager of the FCSB, took on Dan Petrescu, who However, Istvan Kovacs stayed complaining to the referee asking for the defender’s handball. He wanted to underline the superiority of his team in Gruia.

Immediately after the Gruia derby, Dan Petrescu criticized Kovacs’ refereeingbeing of the opinion that the “central” eliminated Susic, the author of a gross foul on Darius Olaru, too easily, after which the footballer of the red-blues was taken to hospital.

MM Stoica offered a sour response to the “Badger”.

CFR-FCSB 0-1. Dan Petrescu vehemently: “Istvan Kovacs’ mistake decided the derby! You don’t have the right!” Contradicted by the world of football

MM Stoica, sharp answer for Dan Petrescu: “He murdered us with nonsense”

“There are many phases in which we were disadvantaged! What else did Boateng have to do to receive a yellow card? I would invite Dan Petrescu to visit me, to remember other memories, because I haven’t spoken for a long time, and to accompany me to the hospital to have what does olaru’s leg look like.

Dan Petrescu has been killing us with nonsense lately! Dan Petrescu said at the conference that he wants traditional teams like FC Argeș to play in the first tier… He should be consulted by a PR specialist and then appear at press conferences,” said MM Stoica, in a dialogue with moderator Dan Udrea on Orange Sport, in the program Sport Report.

MM Stoica is delighted: “This is the first game where we are clearly superior to the CFR in all respects”

The red-blue official considers that the FCSB was “clearly superior to the CFR in all chapters” and praises Tavi Popescu, author of a new decisive goal for the red-blue.

“We understood that the shots on goal ratio was 13-1 in our favor. I repeat, on the goal area we have 13-1! I have no further comment.

If we are still not talking about the pandemic and the atrocities in Ukraine, we are talking about Tavi Popescu. I saw Onofras on GSP Live saying that Octavian Popescu should not be lost… Tavi again proved to be the best. I don’t know what happens to Tavi Popescu, he doesn’t want to score from the box, he only scores from outside the box.

In my opinion, this is the first game where we are clearly superior to the CFR in every way. I also won the duels, which is not the case so far“said Mr. Stoica.

The idea is the following. Olaru doesn’t have a fracture, that’s good news. The bad news is that he has a really bad bruise. We are waiting for him to come back to the hotel, to see how serious our medical staff is

What the standings look like after CFR Cluj – FCSB

The FCSB won the 4th of the 5 matches played in the playoffs and reached 43 points. CFR Cluj remains leader, but the lead is fragile, only two lengths. In the next round, CFR Cluj will go to Voluntari and FCSB to Farul. 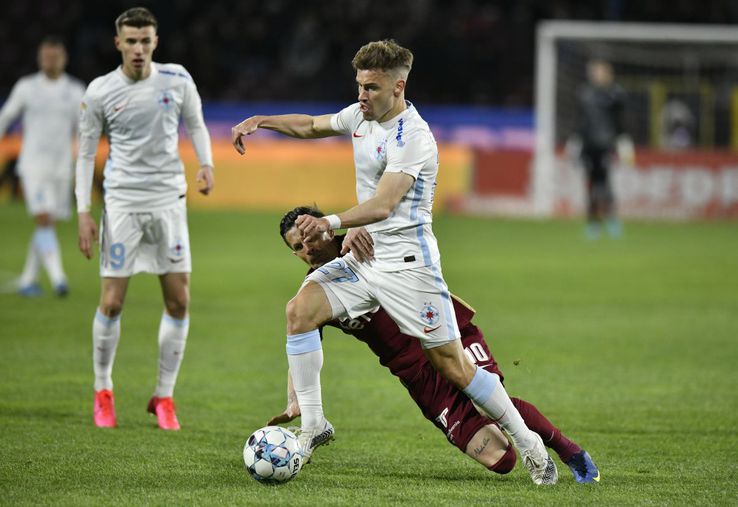 VIDEO Dumitru Dragomir does not change his mind: “CFR Cluj is champion!”

CFR-FCSB 0-1. Dan Petrescu vehemently: “Istvan Kovacs’ mistake made the derby! You don’t have the right!” Contradicted by the world of football